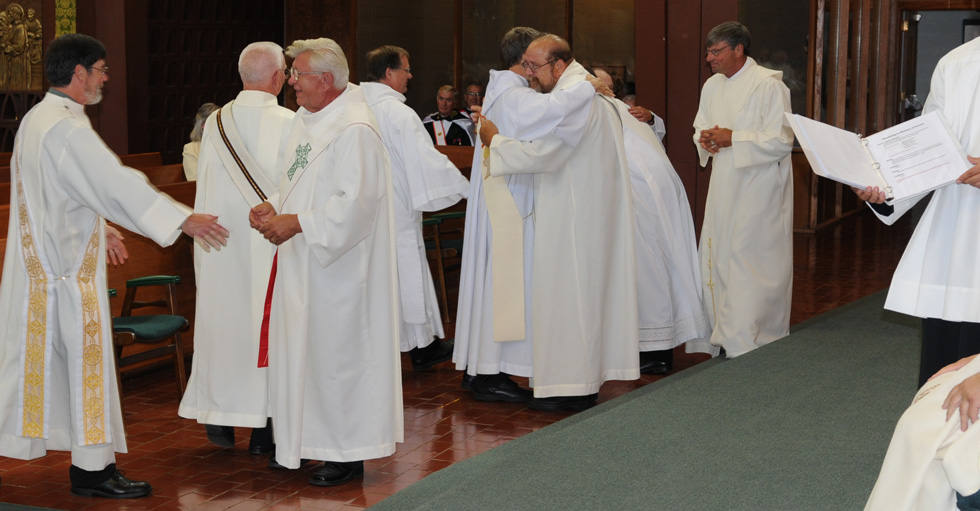 In 1982 under the guidance of Fr. Pat Stilla, who was still in Rome studying at the time, Bishop John O’Mara organized a team of volunteers to implement the permanent diaconate in our Diocese. In September of 1983, the first 4 year training and discernment program began. The first permanent deacon was ordained in January 1987. Three other programs have been completed since then in 1992, 1999 and 2008. Most recently Bishop Colli ordained 8 men in September of 2008. There are currently over 30 deacons serving from Marathon to Keewatin, from Thunder Bay to Sioux Lookout and Red Lake.

Ordained Deacons have been serving in a variety of ministries over the years. When you see the deacon on the altar assisting your Pastor at Mass or preaching the homily once every month that is really a small, but important part of what he does. Conducting baptisms, marriages and funeral liturgies, preaching and teaching the Word of God are parts of the threefold ministry of a deacon as defined by the Church after Vatican II and formalized in 1998. They are called the Service of the Sacred Liturgy and the Service of the Word in our Parishes. The Service of Charity includes service to the young, those who are ill at home and in hospitals, the elderly, prisoners and the poor and this service is the hallmark of diaconal service. All deacons minister in many ways, each using his own unique gifts to help those in need wherever they may be.

“Yours is not just one ministry among others, but it is truly meant to be…a driving force for the church’s diaconia. By your ordination you are configured to Christ in his servant role. You are also meant to be living signs of the servanthood of His Church.” The Heart of the Permanent Diaconate, an address by Pope John Paul II September 1987 in Detroit, Michigan.

A deacon is a clergyman who maintains close ties to the laity through his work and family life. His primary role in the Parish is to assist the Priest to animate the church’s ministry to those in need by working with his Pastor and the members of his Parish Community not by doing it all himself.

Our fifth diaconate training program is underway and there are currently 10 candidates in formation. This year is the 3rd of their four year formation program. Those, who petition the Bishop and are accepted, will be ordained in the summer or fall of 2013.

Candidates accepted into the training are required to undergo formation for a period of 4 years. During that time they attend one weekend a month for six months of the year and experience one retreat weekend per year. In addition they meet regularly with their Pastor and/or a mentor couple for discussion, prayer and reflection. And, of course, there are reading and study assignments between the formation weekends as well. The wives of candidates who are married journey with them through the training. Some of these women choose to offer themselves in service to the Church as ‘ministers of service’ since they have completed the same courses as their husbands. When their husbands are ordained, these gifted women are mandated by the Bishop to serve in a variety of ways depending on the amount of time they have and on their talents.

Simply stated, the formation consists of human, intellectual, spiritual and pastoral training which builds on the learning a candidate has already done in life. An adult education model is used which respect s the mature learner’s abilities and talents and enhances his “spiritual gifts. While it is at a college level, the formation makes accommodations for men and women with different levels of educational background.

Do you think the Diaconate might be for you?

To become a Deacon a man must be...

If he is married, he must have the consent of his wife since she will normally accompany him during his training and often in his ministry. A candidate will habitually display human and Christian maturity.

"With the recent ordination of five new permanent deacons for service in our diocese, we are now reorganizing the formation teams. Deacon Larry Kurec and Sandra Debesys, Minister of Service, will work as a team in organizing the next formation program along with the other members of their group." ~Bishop Fred Colli.

Please contact the Diaconate office if you would like to know more about this vital ministry in the life of our Catholic Church.